We are very happy to have effectively helped our customers with their hair issues over the years. Do read on and hear what they say about Bee Choo Origin treatment.

This is a video compilation of our customers’ testimonials over the past few years of operations. We’ve served thousands and thousands of happy customers, many whom have seen great improvement in their scalp and hair conditions.

This couple in Bangkok had both been having dandruff and hair loss issues for many years. They had tried various shampoos, treatments but to no avail. Finally, through an exhibition which Bee Choo held in Bangkok, Thailand, they decided to give Bee Choo Herbal Scalp Treatment a try. Immediately after their first treatment and after purchasing the anti-dandruff shampoo from Bee Choo, the itchiness and dandruff they had were no longer as severe. This video was taking on their 5th treatment as they want to let other people who might have the same issue as them know that help is here and it is affordable as well. Kudos to the lovely couple for sharing their testimony! 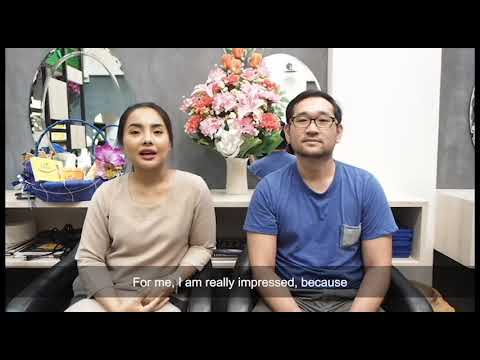 Suvincha had been seeing an increase in hair fall recently, worried about her condition, she decided to try out Bee Choo’s herbal hair treatment. Just after her first’s herbal treatment, she notice that the amount of hair fall had lessen and was compelled to come back for more treatments as she feels that her hair and scalp is much comfortable and healthier after herbal treatment.

Kol has been a regular customer of ours and she has been doing herbal hair treatments even before expecting. When she was expecting her first child, she was aware that she’d face postpartum hair loss after giving birth, a natural occurrence for most mothers.

So she starting preparing her scalp early by doing regularly treatments before and after giving birth. This has helped reduce the severity of her postpartum hair loss and her hair was back to full-thickness within months of giving birth

Ms. Karen has been suffering from a recurring patchy hair loss for a lengthy period of time, affecting the crown of her head. She trusted Bee Choo Ladies and took a treatment course. It took her just 3 months to fully recover from her hair loss. In addition, her scalp is now much healthier than before and the bald patch is no longer visible! Hear it from her yourself:

“Karen: I can see a lot of improvement so when I touch my head at the back, I dont feel the baldness there cause my sister say “hey your hair here got one patch, you look very horrible, better go and do something or all your hair might become BOTAK!” Interviewer: So what was your first experience like? Karen: Very good, the staff are all very courteous, helpful and the place is very nice.  Interviewer: How long have you been with Bee Choo? How many treatments? Karen: 10, 10 treatments Interviewer: So how is Bee Choo different from other hair treatment companies? Karen: Your treatment is quite straight forward. The price here is also reasonable, affordable. Because I did try other hair treatment like at SGD 3000 plus but to no effect”

This video is a must watch! REAL pictures, REAL videos, you just can’t make up such recovery stories.

Pimpchanok was suffering from hair loss and oily scalp. She walked passed Bee Choo Tawanna and decided to give it a try. After her first treatment, her scalp felt much healthier. One day, while visiting her regular hair dresser, her hair dresser told her that hair is much thicker and healthier and asked her what she has been using! From that day on, Pimchanok was convinced of the effectiveness of Bee Choo’s herbal treatment and has brought many of her friends to try the treatment as well! Hear it from her yourself!

Rachel has been having two patches on her scalp which is extremely itchy and hairs on the patch gets broken for several years. She had this condition for years and had never been able to solve it. It was only recently, when a friend told her to try out Bee Choo Ladies that she decided to give it a try. She was surprised to find out that the treatment prices was reasonable and she decided to commit to a weekly treatment for the first month with Bee Choo Ladies.
Below is the picture of the hair scan of the patch. Rachel: ” There was always some itchiness and it is on & off and I always had one patch in my scalp that really get quite itchy I think it has been for a few years the itchiness comes and goes so what I will do is try different shampoos that is supposed to be for itchy scalp. But it doesn’t seem to help.”

Bee Choo Ladies: ” Other than the shampoos, did you try other treatments?”

Rachel: ” My hair stylist did recommend me. Once we did hair treatment for the scalp. But I think it didn’t help as well. It is like those normal hair salon kind of treatment.”

Rachel: “A friend of mine. Initially when they did the consultation of the scalp. The therapist said that it was oily and because of the itchiness, they took some scans and it looks like there was some bacterial infection. So they recommended to start treatment once per week for the first month and monitor the condition after. I started treatment some time before Chinese New Year (4 months ago) and right now I am doing two treatments per month. The patch is pretty much healed. Really a lot less itchy now because there was a period of time when my scalp was really very itchy! But right now you can see and feel the difference”

Allanna Tok had been suffering from thinning of hair and hair loss for 10 years. her hair loss first started after a rebonding session which left her with an allergic reaction to the chemicals. After that, her hair thickness and volume was never the same. She had tried various products: hair loss shampoos, tonics etc, But none of them worked. After hearing of Bee Choo Ladies, she decided to give Bee Choo Ladies a try, after about several months of treatment, she saw the results for herself. If you are suffering from hair loss, do not despair, especially for early stage hair loss. Opt for a herbal hair treatment with Bee Choo Herbal. Bee Choo Herbal’s treatment is non-invasive, chemical free and affordable.

I would say I first started losing hair about 10 years ago After a rebonding session. That was quite bad. So I had alot of hair fall issues. I basically stopped all forms of treatment and Hair colouring for the last 10 years. And so I have tried alot of over the counter products: shampoo, hair spray, you name it, nothing works.
I’ve thought of more expensive programs like Yum Nam & Beijing 101. But it doesn’t work for everybody because I have colleagues  who actually tried those cheap one time trials as well but they were very pushy.
So i decided to give Bee Choo a try and after the first session, I felt that my hair was drier and not so frizzy. Scalp feels alot cleaner. I think the greatest impact was the next morning when i woke up it will always feel very matty and I will feel like I need to wash it. But surprisingly (for the first time) the feel was still very good so i was actually pretty enticed to come back again one week later.
I like it that they (Bee Choo Origin) don’t hard sell. They don’t push you.
The second week was my second session so I did a consecutive 13 sessions, 13 weeks.
I always like to ask the ladies whenever I am here that.. is it growing? And they have always been very positive and convincing that it is growing. But, you don’t know like if it is like a sales tactic or whatsoever until 6 months later when I saw  the pictures. I was like Yes!
– Alllana
It really is working!

This video is a must watch!

Trixie - Recovering from a bacterial infection​

Originally posted on www.beechooladies.com
This young lady had been suffering from severe hair loss for a long time. She is not yet a teenager but below is the photo of her condition prior to starting treatment with Bee Choo Ladies. On closer inspection, we realise that her hair loss was due to a bacterial infection as the hair scan showed hair breakage. If you look closely at the hair scans, you will see black dots. These are actually fully grown hairs that have broken off near the roots! The bacterial attacks the hair and causes breakage. In serious cases, it can also infect the scalp causing inflammation, infection and extreme itchiness.

Can you imagine the difficulties she faced while in school? It must have been a hard time for her in school. We were really heartbroken and we really wanted to do our best to help her. We recommended her to do herbal treatment once per week for the first two months and after that twice per month. We recorded her progress; these are the results: We are glad to say that we managed to help her recover from her condition in 7 months. We are grateful for her patience and trust in Bee Choo Ladies. Bacterial infection can be treated, but it must be addressed quickly before it starts spreading to other family members. The fastest way to deal with it is to go for treatment, dispose all existing hair equipments and, avoid muddy area and pets as these are possible areas where the bacterial was contracted from!